As the rippling waves emanating from the cesspool that is Sir Jimmy Savile’s legacy break on the shores of the British establishment, it is becoming increasingly clear how the establishment is attempting once again to protect its own.

In response both to Tom Watson’s questioning in the House of Commons – and the fabulous impromptu exposure by Philip Schofield (an event surely set to become legendary in television history) British Prime Minister David Cameron’s singular response is that anyone with any evidence should go to the Police, regardless of how powerful the accused may be. Is Cameron aware that multiple victims in the North Wales inquiry names the same high ranking Tory politician, and in at least one case, the police deemed their testimony as “fantasy”? For a Prime Minister, it is a breathtakingly, though probably deliberately naive approach. It feels like a government’s greasy denial that paedophiles are operating in positions of power. North Wales abuse victim Steve Messham testified that his life was threatened by his abuser, which is a common intimidation tactic seen in many abuse cases. Death threats change the playing field considerably.

Cameron: confused, or just waiting to pass the buck on?

So where exactly is David Cameron suggesting survivors take their evidence ? The serving police officers referred to by some of those abuse at the hellish Bryn Estin in North Wales? Or is the Prime Minister proposing just walking in to your local cop shop ( if you can still find one of course, given the aggressive programme of police station closure now being implemented by Cameron’s government) and saying “Hey! I was raped by ********* twenty years ago”?

Sensitive matters such as child rape require sensitive solutions. Cameron’s response is not only inadequate, it is simultaneously ignorant, insulting and ludicrous. Lest anyone has missed it, serving police officers and members of the judiciary are among those named by Bryn Estyn victims. It is increasingly clear that the original inquiry was a cover-up, and let us not forget the Masonic connection.

The Waterhouse Tribunal set the tone for its approach to freemasonry right from day one.

In the very first session the barrister for one of the groups of former residents of care homes made an application about masonry. The barrister, Nick Booth, asked that “the Tribunal should keep a register of the masonic membership amongst its staff, the members, its representatives and witnesses who appear before it”. He explained: “The duty of loyalty to a brother mason and his duty of impartiality if he is involved in the administration of justice is not a new one and it’s one that’s very much in the public eye, particularly at the moment.”

“The Tribunal will be aware of the House of Commons Home Affairs Select Committee which is investigating the issue,” he added. “Sir, I stress, if I have not stressed it before, that I am not making any suggestion of disreputable conduct, merely to put the matter beyond the reach of any possible public comment which might undermine the public confidence in the Inquiry.”

Sir Ronald Waterhouse, who chaired the Tribunal, felt that the application was a slur on the integrity of the Tribunal’s staff.

“It will not surprise you that the application is refused,” said Sir Ronald on their return. “As far as the staff are concerned,” Sir Ronald said, “in so far as the application carries any reflection upon the integrity of the staff of the Tribunal it’s repudiated, wholly unwarranted; there is no evidence whatsoever to support any suggestion that they have not acted with complete integrity… ”

“The members of the Tribunal are in this position: the Tribunal was set up by Parliament and the members of it were appointed by the Secretary of State for Wales and the [criticism of the composition] should be addressed through the proper channels.”

He said that the Tribunal’s own Counsel, Gerard Elias QC, was appointed by the Attorney General. “Any criticism … should be addressed through the usual Parliamentary channels,” he suggested.

Gerard Elias said nothing during Booth’s application and he remained silent after Sir Ronald had made the Tribunal’s ruling.

Gerard Elias QC. Leading counsel to Tribunal kept silent on discussion about a register of freemasons. He himself is a freemason…

Yet both Sir Ronald and Gerard Elias knew something that journalists reporting on the Tribunal would have wanted to know.

Gerard Elias is a mason. He’s a member of perhaps the most powerful masonic lodge in Wales, Dinas Llandaf. The lodge, which meets in Cardiff, is made up mainly of legal professionals and members of the Conservative party, although there are members from other political groups. This in and of itself is not a problem, but there is a problem if fellow members have an oath of loyalty to each other which supersedes their oath to uphold law and conduct due diligence in any proper investigation into organised crime.

British ‘Justice’ done in the dark

Imagine a mafia trial where the prosecution and the defense had members of the mafia embedded in key positions. What would be the chances of full disclosure?

We have to ask ourselves, is it possible to have an investigation free from private allegiances stemming from Masonic interference? The British people will demand both a full public enquiry  into the extent of child abuse , rape and murder in Britain both past and present, and a new independent Police investigation with a remit to arrest and prosecute, headed by officers prepared to DECLARE PUBLICLY that they are members of any secret society.

David Cameron can do this now, and retain some personal integrity, or wait until his hand is forced, and retain none.

One thought on “ARTICLE: David Cameron just doesn’t get it – the police and judiciary are part of UK abuse problem” 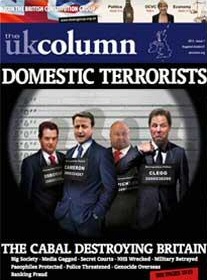